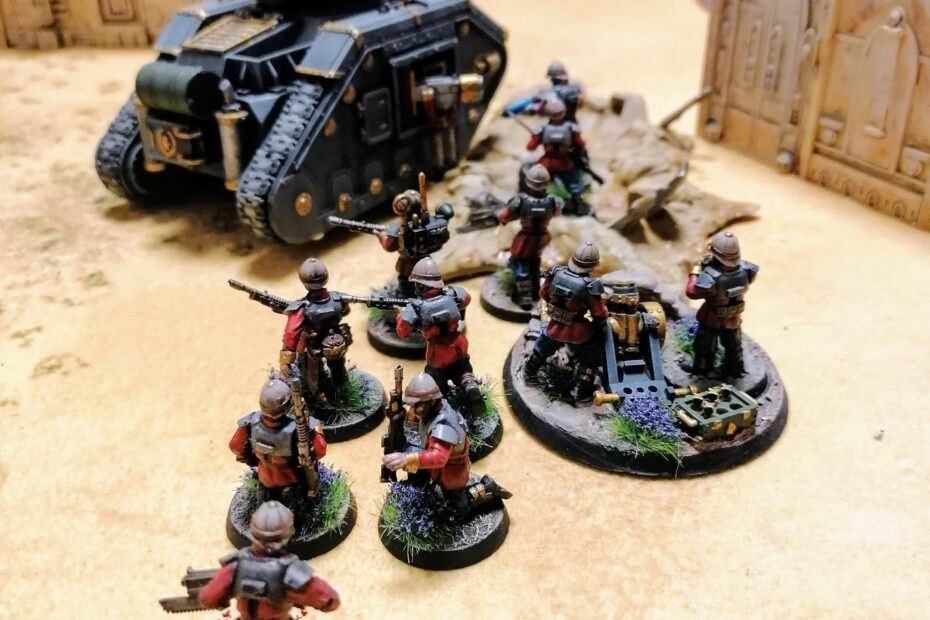 I shall prefix this report as an experimental battle force in a newly forged Hammer of the Emperor Detachment of the Fauxtorian Guard. An armoured fist of Leman Russ tanks designed to punch and hard block it’s opponents.

Elements of the Fauxtorian Guard advancing through the ruins of a fallen settlement on an aggressive armoured patrol found an Ork raiding force sweeping in fast to meet them. Low on infantry, with minimal Scion and air support, the Russes of the former 2nd Hallicon Armoured Regiment would bear the brunt.

The armour rolled forward to form a wall of steel and provide interlocking fields of fire as the Ork mob and buggies swarmed forward.

The sudden engagement had left much of the key firepower out of place and initial panic saw many shots miss. Opening salvos were soaked up by the Big Rig at the back of the table. As the dust settled a handful of Orks died along with a single Buggy. The Kill Rig remained, still mobile … rumbling forwards. The Horde rolled on undeterred.

The familar sound of Ork battlecries could be heard. The critical moment of the battle had arrived. This was the phase of the battle where the green tide would be broken or wash over the Faxutorians.

The Kill Rig’s occupants bailed as it committed to charge a loan Russ. The Demolisher cannon in the turret spat fire ineffectively and missed wide. Its trio of heavy-flamers let rip and one found a weak point finally disabling the rig before it could ram.

Orks on giant red squig beasts roared in behind, hurling spears and finally destroying the tank in retaliation. Only to be turned to red mist by an upgraded Punisher equipped tank commander.

Meanwhile Ork Commandos and Boys burst from the central ruins to swarm two tanks before overwatch could be fired. These tanks swiftly fell back having taken a series of dings and dents and shrugged off a squid bomb attack.

With the tanks now fallen back, a hideous crossfire of guard infantry and tank Demolishers and Heavy bolters dropped the Orks where they stood puzzled at the sudden disappearance of their “prey”.

Defkoptas swooped in to rake another Russ with rockets and then charged in. Overwatch dropped one, but the other two ploughed in tearing away armour panels in a whirl of blades.

The Russ fell back to allow his comrades a clear line of sight to swat the remaining Koptas from the sky.

And from there it became a mop up exercise. The green tide had been turned.

At the end of round 3 scores were tied. But with only a warlord and Killa Kans left on the table, the Orks slunk away looking for easier prey elsewhere.

In short, it turns out that 7-8 tanks auto wounding on sixes to hit are nasty. Especially against Orks with T-Shirt saves (6+). Hammer of the Emperor isn’t a game changer, but it can be fun and speeds up the process a lot.

Also for casual games. Tempest of War cards allow you to keep a game varied and both players scoring. They open things up for non-competitive play and more narrative scenarios. For players to add or modify the rules to suit. They are a breath of fresh air and a great way to add tools that bring some balance to mismatched factions.